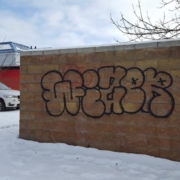 When most people hear “power washing,” they think about restoring residential decks or siding to their original appearance.

Power washing takes water and puts it under from 2,000 to 4,000 pounds of pressure per square inch (PSI) – essentially turning a normal flow of water into a mega-powerful tool capable of erasing even the most stubborn dirt and stains.

So, beyond decks and siding, what can be cleaned or removed using power washing? We’ve listed some of the “tough ‘n’ ugly” substances that can be removed from areas around your building to improve appearance and ensure safety:

Grease. Grease left by cars in your parking lot can be a safety issue if someone slips on it, and also tends to dirty your interior because people walk on the grease and carry it into the building on their shoes. Another area that’s prone to grease buildup is the perimeter around your trash receptacles. Spilled food and liquids collect and can trigger a costly slip-and-fall accident; that same collection of dirt is undoubtedly being brought into your building on the soles of shoes, too.

Weather stains and airborne pollution. Take a look at your building walls, outdoor seating areas, permanent trash containers and signage. All of these can become stained by the chemicals in rain and the dirt in the air. Buildings with rough exterior surfaces are especially prone to collection of dirt that darkens the surface over time.

Gum. Did you ever take a good hard look at the sidewalk on any major street? If you have, you’ve seen thousands of round black spots. That’s gum. When people drop gum, it quickly picks up dirt and grime and becomes a nasty black spot that only a power washer can remove. Besides being unsanitary, gum makes your entryway or sidewalk outside your building look shabby and unprofessional.

Mineral deposits. Chalky white mineral deposits sometimes leach out of brick and masonry. If your building is brick, check to see if this natural process is resulting in ugly stains – power washing takes it off in seconds. Mineral deposits aren’t necessarily harmful to the surface, but they don’t make a very positive impression!

Mold and Mildew. In many cases, power washing can also obliterate mold and mildew stains on buildings (though they sometimes need additional chemical treatment), typically found in spots that stay damp, like near shrubbery, air conditioning units, and where shade is prominent. Mold can erode certain surfaces, so the sooner you have it removed, the better.

Graffiti. Nothing gives a negative impression of your establishment than graffiti on sidewalks and walls. Depending on the surface on which it was put and the type of paint used, graffiti can be removed simply by power washing.

Think you might have some of these issues around your building? Crestviews teams have quite a bit of valuable experience using power washing to return your building to almost-new condition – give us a call! We’d be happy to come out and take a look and provide an estimate for making your building and its surroundings spotless.

What is the difference between a Blizzard and a Winter Storm?
MY LAWN ALREADY HAS WEEDS! WHAT ARE THEY, AND WHAT CAN I DO ABOUT IT?