Get A Head Start On Landscaping Maintenance In Spring

Landscaping maintenance, like other kinds of work that is dictated by changing seasons and various environments, is best started early in the year. As March unfolds, you should be well into it.

• April and May are too late in the year for the kind of preparation necessary for the well-groomed landscape you want, especially in areas in the Northern part of the country, such as Minnesota, Wisconsin. By mid-April, new plants are already beginning to grow in at lower altitudes. Before too long, opportunities to clear out deadwood, trash, and underbrush from last season will be hampered.

• Remember, if there is rubbish, boards, pieces of plywood or other refuse laying around, removing them early in the season allows the grass or other plants covered by them to grow in naturally. Waiting too long can stunt the new growth of those plants and leave them as an unpleasant, shadowy reminder of the mess that was there, which will be a blemish on the property.

• You may have a pet project in mind that will take some construction and will disturb the area. Getting it done early will allow time for new growth and newly planted shrubbery to mature and have a nice, well-established appearance before the heat of summer hits and growth is inhibited by restricted access to water.

• If you are in an area where water is rationed, new plants and new growth is dependent on moisture from spring rains and wet conditions, which isn’t available later in the year.

• Some blooming shrubs should be pruned early in the spring as new blooms sprout on the new wood.

• Likewise, many evergreens do better if they are pruned before dormancy has ended. This allows the clipped ends to harden and new growth to sprout. Also in the spring, after new growth has formed, you have an opportunity to trim evergreen hedges. It is at this time that growth can be guided and shaped by judicious trimming.

• Early spring is the best time to start cool-season grasses if they were not planted the previous fall or – in moderate areas – during the winter.

• Wait no longer than late spring to plant warm-season grasses. For either cool or warm varieties, you must avoid the hot, dry part of summer.

• Allowing enough time to have trimmed the lawn several times before a draught helps train the grass to grow at a preferred height while also providing a natural mulch cover to hold in moisture for those really dry, hot summer days.

• For flowers, perennials should be planted in late spring. Some flowering plants will resist a late freeze, and you must ask your landscaping professional for advice about which will do best early and which late. Overall, spring is flower-planting season for most popular varieties.

If you have a regular landscaping maintenance service, much of this planning can be left up to the professionals; however, you may want some input into the plan and this should take place before the spring season is underway.As well, any new construction or major changes can be done under optimum conditions if spring maintenance chores are begun early. 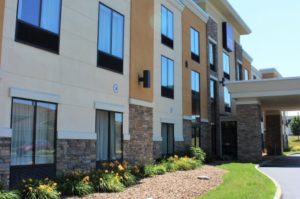 What is the difference between a Blizzard and a Winter Storm?
5 Tips On Hiring A Day Porter Company  Here Is What To Expect From Good Landscape Maintenance Services
Scroll to top